Sir, Your leading article (Africa’s other war, Oct 8) stated that China has not yet faced up to the ivory crisis or its role in it. This is far from the facts.

China takes the ivory crisis extremely seriously and is committed to tackling it. Asian and African elephants are species that receive grade-one protection in China. The Law on Wildlife Protection is being exercised in rigorous terms. And the Chinese government is one of the toughest in combating ivory smuggling. Under Chinese law, smuggling ivory may lead to life imprisonment. In recent years China Customs has rooted out more than 200 criminal gangs involved in smuggling endangered species. 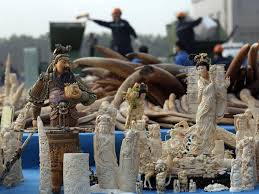 The State Forestry Administration, China Customs and the International Fund for Animal Welfare worked together to place Convention on International Trade on Endangered Species (CITES) posters at hundreds of ports of entry and exit in the country. E arlier this year, China led an intercontinental effort of 22 Asian and African countries to fight smuggling of endangered species, elephants included. More than 10,000 law enforcement people were mobilised and a large number of cases cracked. China’s efforts were applauded by CITES.

We stand ready to work with all other parties to make continued and unremitting efforts to protect elephants and other wildlife.

Miao Deyu
Spokesperson of the Chinese Embassy in London