Perhaps you are a new eco-warrior or maybe you have wanted to make your bathroom more eco-friendly for a while, but just haven’t had the time. Either way, it doesn’t matter. What matters is that you are here and want to change your lifestyle and make part of your home – your bathroom, more eco-friendly.

Whether you want to help reduce your energy usage or save yourself some money, you have come to the right place. 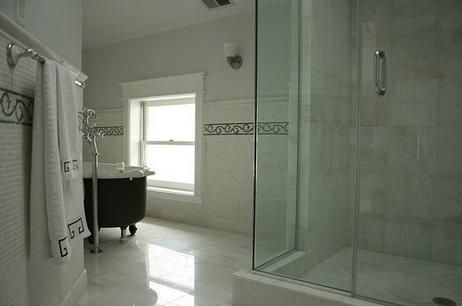 Updating your bathroom and transforming it into a more eco-friendly space doesn’t have to be expensive. In fact, it can be done for little to no cost at all, all you need to do is follow these tips:

Use your bathroom fan

Using your fan might sound like a drain on your household energy, but if you want to prevent mold growing in your bathroom, this is a must. Instead of just turning your fan on for a few minutes after your shower and then turning it off. Turn your fan on before you get in the shower and leave it running afterwards.

If the idea of using your fan more doesn’t appeal to you, due to the increased energy usage, you could open a window instead. It may not work as well, but leaving a window open for half an hour after your shower, should do the trick.

Turn down your hot water

Did you know that your water heater could be using as much as 20 percent of your home’s energy? That’s a crazy amount.

Most water heater manufacturers preset water heaters to heat water to around 140 degrees, which is way too hot. To save energy, reset your water heater to 10 degrees lower – 130 degrees, and you can save five percent on your annual energy costs.

If you water heater is old, then it might be a good idea to consider replacing it with a newer, more eco-friendly model. By swapping your old water heater for an eco-friendly alternative, you could reduce your energy usage, and save money on bills.

Believe it or not, many baths, showers, and sinks have taps on them that waste a lot of water. Each year in the US, thousands of gallons of water is wasted because most homes don’t have water saving taps installed.

The next time you want to replace your bathroom taps, have a look online, on tapwarehouse.com, for water saving taps. Or, if your taps are fairly new, you can buy devices that fit onto your taps instead.

Install a flush with two setting.

Instead of having just one flush setting, install a flush that has a setting for number ones and number twos. That way when the toilet is used for number ones, a smaller amount of water can be used to flush them away. Instead of wasting water.

It’s surprising how easily you can make your home more eco-friendly, all it takes is a few small changes.