Last year the small family-founded British brand Ella’s Kitchen – which has grown to be a £41.2m organic baby food giant that dominates 25 percent of the UK market – was sold to the US food behemoth Hain Celestial for an undisclosed sum.

Paul Lindley, the company founder and the infamous Ella’s father, accredits the company’s success to “catching the zeitgeist of our times.”

With most pouches and pots of organic baby food costing between one and two pounds for around 150g of puree – consisting largely of root vegetables – M&S, Mr Lindley and the dozens of other baby food brands have tapped into a very lucrative zeitgeist.

Dr Ellie Cannon, a London GP and author of Keep Calm, The New Mum’s Manual, said that many parents feel pressurised into buying organic baby food products, which have become “another aspect of the multi million pound parenting industry.” 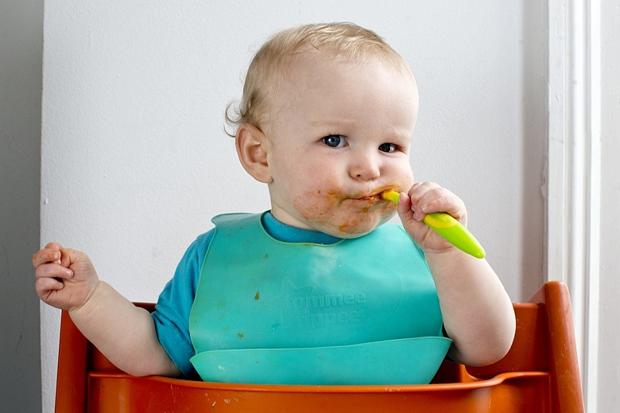 “Organic food for babies has become the norm. It is now part of the parenting agenda and another thing that parents are made to feel they have to buy into,” said Dr Cannon.

“It is understandable that parents would want the best for their kids, but the whole industry is completely commercial and market driven. I have parents coming into my surgery who refer to their baby’s food by listing brand names – they’ll mention ‘an Ella pouch’ or a ‘Hipp pot’.

“It shows how much these commercial brands have become an integral part of middle class parenting.”

In the last baby the last Baby, Food and Drink report the consumer intelligence company Mintel suggested that the “mini baby boom” between 2011 and 2013 could.be credited for the rise in sales of organic baby food.

Similarly, the growing trend for delayed motherhood has resulted in more financially secure parents who are able – and willing – to spend more on brand name organic products for their children.

However, as the demand for organic baby food grows, the number of farmers willing to produce pesticide free fruit and vegetables for these pureed meals is dwindling.

The 2014 Soil Association report revealed that the number of organic farmer and food processors fell by six per cent last year and currently only 3.6 per cent of England’s agricultural land is used for organic farming.

This article was provided http://www.Oddfamily.co.uk